The 1956 Summer Olympics, the Games of the XVI Olympiad, were held in Melbourne, Australia. 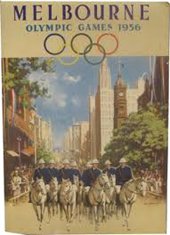 The stumbling blocks of the Melbourne Games

The number of athletes participating in the 1956 Summer Olympics was down by about one third compared the earlier games, because: 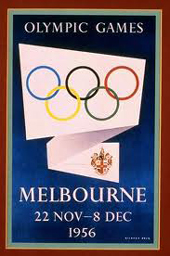 Remarkable Events of the 1956 Olympics

Throughout the 1956 Summer Olympics, Hungarian athletes were cheered by fans from Australia and other countries. 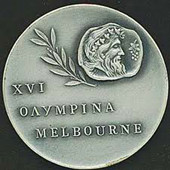 The match of the Hungarian water polo team against the Soviet Union became known as the Blood In The Water match. The game became rough and, when a Hungarian was forced to leave the pool with blood streaming from a cut over his eye, a riot almost broke out. But police restored order and the game was called early, with Hungary leading 4 0. The Hungarians went on to win the gold medal.

Despite the international tensions of 1956 or perhaps because of them a young Melburnian came up with a new idea for the closing ceremony. Instead of marching as teams, behind their national flags, the athletes mingled with one another as they paraded into and around the arena for a final appearance before the spectators. That began an Olympic tradition that has been followed ever since.

The Melbourne Olympics became known as "The Friendly Games".

The Olympic Flame was relayed to Melbourne after being lit at Olympia on 2 November 1956: 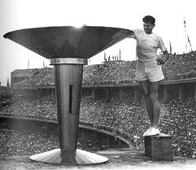