Being one of the Melbourne cup winners is the dream of punters, horse owners, trainers and jockeys on Melbourne Cup Day - the first Tuesday in November.

Many Melburnians flock to Flemington on the Cup morning. Races are held throughout the day, culminating in the main race in the afternoon.

It is a major event and public holiday in Melbourne. But more than that, all of Australia stops for the live telecast of this internationally famous horse race. Its one of those defining Australian icons. 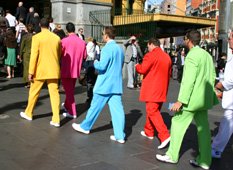 The Melbourne Cup is a handicapped race over 3200 meters. This means that the better the horse is, the more weight it has to carry in the race.

Sweeps are held by just about every group of people. This is not so much a betting system, but a lottery where every player gets a ticket of a randomly drawn horse  and a prize if this comes into the first three places.

The Melbourne Cup is the culmination of the Melbourne Spring Racing Carnival. It is a prime time also for parties, luncheons, alcohol, huge hats and racetrack fashions...

1930, Phar Lap became the most famous and most loved Australian race horse. He had also come second the previous year and eights the next year. He died - possible poisoned - under suspicious circumstances in the US after winning an internationally important race there. Today you can look at Phar Laps body in the Melbourne museum. Here is a great story about his life.

2007, Efficient, a New Zealand horse and outsider to win an international but decimated Melbourne cup, because of Horse flu in other Australian states.

2008 was won by Viewed with jockey Blake Shinn and trained by Bart Cummings. This was Bart Cummings 12th win, with the first one being in 1965.

The 2009 Melbourne Cup was won by Shocking.

2010, the Australian favourite, Bart Cummings' So You Think was outstayed by the French horse Americain, the third European horse to win in Melbourne.

2011, the French horse, Dunaden won by a nostril width in front of the English Red Cadeaux, leaving the Australian horses again behind in the field.

2012, leaving all the favourites without even a place, Green Moon won the cup with jockey Brett Pebble.

Here is the whole list of the all Cup Winners.