The Melbourne music scene is becoming internationally known, and Australia is now no longer regarded as the mere runner up in the international music scene. It stands proud next to the infamous New York and other American sweet spots - times they are a changing.

In fact, Melbourne is continually growing its diverse music scene and is now highly regarded as the Mecca of music in Australia.

With the licensing prices different here in Melbourne (compared to pricy Sydney), it is now easier for those cosy, unique Melbourne music venues to survive and deliver entertaining music all year round.

I would actually compare it to the Big Apple (Dont worry, Ive been there so I know what Im talking about). That is a big statement. 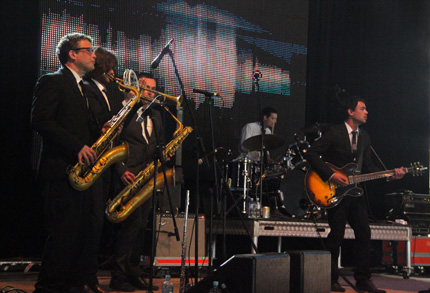 Melbourne has one of the most extensive and regarded alternative, DIY, avant-garde, experimental and independent music scenes in the world. Many of the reasons this is so is because of the strong musical backing from community radio stations, various street magazines and independent record labels.

Where to Listen to Melbourne Music

If youre in town, check out PBS 106.7 and RRR 102.7 on your FM dial to hear plenty of great music from all genres, and also their gig guides, which are very useful

Or you can walk, ride, tram or however you want, to any local pub or music venue and pick up a Beat, Impress or 3D World magazine. These are invaluable guides to all of Melbournes great venues and gigs. Call it your music Bible while in Melbourne.

Our city has churned out bands such as The Cat Empire, The Living End, The Bamboos, The Drones, My Disco and tons more who have toured on an international scale. Some recent bands have also started becoming recognised on a worldwide scale in the world and jazz genres.

Melbourne has hundreds of music venues, all in different varieties. From tiny, intimate Jazz dens to hip, sophisticated music clubs  and all the way to hardcore rave venues, for all you hardcore ravers out there! But the thing is, you need a bit of an insiders guide on where to go, otherwise youll miss out on plenty of it.

Gigs generally run 7 days a week throughout the bustling city, but like most places, the best gigs are from Thursday to Sunday nights. Most venues charge around $5  10 per gig, with a multiple band line up if your lucky!

If your feeling tight for change (remember $5 is nothing for an amazing bandSupport local music!) youll definitely be able to find free shows any time of the week. Put it on your list to explore venues in Fitzroy, the city, Brunswick and Richmond as these are the finest.

There are also some pretty crazy do-it-yourself style venues around these inner city suburbs. These are usually held in private warehouses, and the only way to find out about them is from word of mouth or Facebook. Pretty much the same these days anyway.

Melbournes frequently growing culture is providing a perfect home for musicians of all types. Funk, Indie rock, pop, metal, hip-hop, jazz, African and Bollywood are just some of the many genres and styles showcased in this great city. So go out, grab some mates and explore the truly inspiring Melbourne music scene. Support live local music!(by David Thor)