Swimming with Dolphins
near Melbourne

We loved our swim with dolphins, just over an hour out of Melbourne. If you are lucky they swim around you as you get pulled through the water. Snorkelling with the seals and exotic fish is also part of the trip and was just a good.

The idea of swimming with dolphins always enticed me. The thought of gliding through the water with one hand on their silky skin and the other drifting behind you...

Okay well you can't get that close, but you can swim alongside dolphins near Melbourne. Dolphins in Victoria are protected from too close encounters to preserve their natural life.

The lack of contact with the dolphins is surely redeemed by snorkelling with seals and exotic fish, and the laid-back local crew that helped us along the way, and who obviously cared for their marine park. 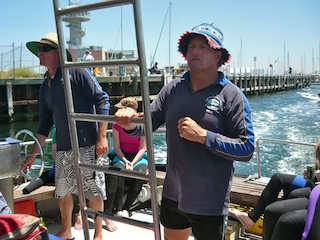 Our dolphin tour started off at Queenscliff, right at the open mouth of Port Phillip Bay and near the notorious rip into the Great Southern Ocean.

Queenscliff used to be an old fishing port and army defence post between the Bay and the ocean. Today it is a quaint place with a number of historical buildings and sites, cafes, B&Bs and a spot for a weekend away.

After one of the best lunches I ever had - blood orange and rocket salad - in a local beer garden, we took off to the mariner where our small tour boat was docked. It was a relief to see that it was not a tourist vessel, but looked rather more like an old fishing boat with three local friendly staff, the skipper and two helpers.

Together with around 10 people, of all types and ages, we got into our wetsuits and slippers and set sail on a sunny November day. The tour operates in the warmer 9 months of the year.

There are a few other dolphin swim tours in the area, some operating from the Mornington side, some from Queenscliff. Just as we left the mariner, word had come through the radio that the dolphins had been spotted on the other side of the mouth of the Bay, near Sorrento. 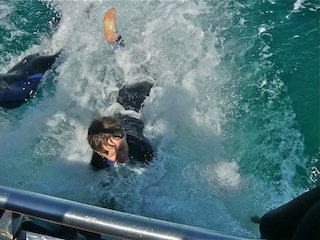 As it is never guaranteed that you see dolphins at all, the skipper changed his plan of action and we sailed 20 minutes across to find them. Melbourne and the Bay are subject to rapid weather fluctuations and it was a good idea to grab the opportunity of getting near them.

The crew on the lookout did spot some dolphins and navigated the boat to near them. The dolphins seemed to be just as interested in the boat as we were in them and they came swimming around and under our vessel.

On cue, half of our swimmers jumped into the water, instructed to hold onto a rope off the back of the boat, which dragged us along behind it. The rest of us were on lookout. From the lookout we spotted a whole group of dolphins only several meters away, swimming around and under the boat.

Seeing them from the water was a slight hit and miss affair, as you are in a bit of white water behind the boat and don't know which way they are coming, but I managed to see and nearly touch a dolphin crossing below me.

The operators follow strict environmental regulations and people can only be in the water for a few minutes and only a few times. We managed to get two goes and probably as got as close as you can get to dolphins in Melbourne.

By the time we had done the dolphin swim - with the skyline of Melbourne in the background - the group had become pretty thrilled and relaxed. Everyone had seen a dolphin, so their unguaranteed guarantee was fulfilled. 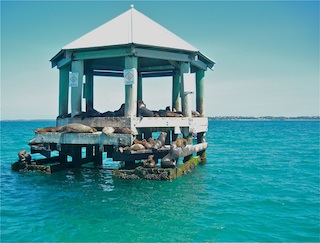 We had some refreshments and sailed off again out to Chinaman's hat. This is a manmade platform that seals live on. It is like a retirement village and nursery for seals, sheltering the old and the young.

We circled the platform around the barking seals, anchored the boat and jumped in to join the seals with our snorkels. The younger ones were gracefully cruising through the water around us and we managed to get pretty close to some of them. They were interacting and saw us visiting as a game, rather than something to avoid, very cool. The big old ones were sunning on the platform.

After getting back into the boat we set sail for the Popes Eye Marine National Park. This is located on Mud Island, an incomplete island fort built by the army during the late 1800's. This has gradually and naturally been converted into a mini reef and is a haven for fish and marine life, as well as a nesting area for birds.

We got back into the water and snorkelled around this reef, which was teeming with marine life. We saw heaps of starfish and exotic fish swimming around the vegetation of the reef, and found plenty of interesting starfish, but due to regulations were not allowed to take them. After a while we started to feel the cold and were glad to be back in the boat.

Then it was real fun time. We stopped in the open water and had the opportunity to jump off the roof of the boat into the water. The people with guts braced the 3m-jump and hurled themselves off the roof into the bay. 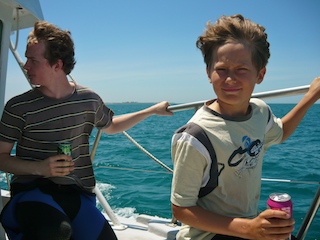 At first, our 10 year old balked after seeing the drop and quickly walked back down the stairs. But when the rest of us did it, he decided to do it anyway. He ran and jumped, and loved it - again and again. This was so exhilarating and we did not want to stop or the trip to end. Funnily, this turned out to be the favourite part of the trip for the kids.

But after a long, eventful afternoon, it was time to sail home, dry off and gather our gear. The trip was awesome and we recommend it to anyone. The people running the tour were genuine and friendly, and not formal at all, more like friends. And they let us do our own thing independently, which felt good. One of the best ways to see dolphins in Melbourne!

Return from Dolphins Melbourne to Things to Do in Melbourne

Back to Water Activities Melbourne