The Melbourne Cup is one of the worlds most famous horse races. On the first Tuesday in November, at 3pm, this event stops the city  in fact the whole nation. In Victoria it is a public holiday.

Its the day when people otherwise not into horse racing, will place a bet or be glued to a TV set to watch the race.

Melburnians, if they have not flocked to the Flemington Racecourse, tend to either gather somewhere for lunch, or take the opportunity to get away from it all for a long weekend.

Many groups run Sweeps, where each member buys a cheap randomly chosen ticket representing a horse. There are colour lift-outs with images of each horse in the papers, which are cut up and used as tickets. The cash pool is then redistributed to the three winners. 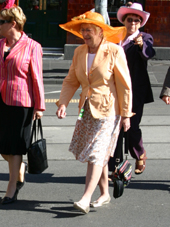 From its beginnings in the 1800s, Spring Racing has attracted High Society - the wealthy and the want-to-bes, parading their latest fashion outfits in the spring carnival atmosphere of the races.

In the 1960s, when attendance to the horse racing Cup had waned, the clever introduction of the Fashions in the Field competition managed to encourage female race-goers back on the tracks with their glamorous outfits. 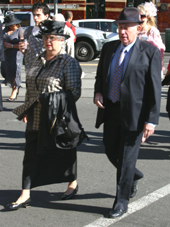 Stylish fascinators and hats are an essential part of the Spring racing fashion. Traditionally, they were extravagant pieces, decorated with feathers, beads, jewels and other embellishments. Nowadays, they tend to be more minimalist.

In the time leading up to the Cup, Melbournes expensive milliners, op-shops and other stores are busy selling hats and accessories. On the Cup day you can find almost anyone with a hat - kids in self-made fashion hats, people with any hat they could lay their hands on, and many with carefully chosen and decorated head pieces. 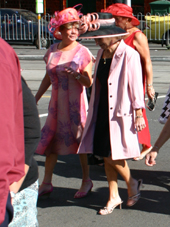 The Spring Racing Carniva begins after the AFL Finals in September with a range of qualifying races.

The first major race carnival, the Caulfield Cup, is a tough 2400m race in the middle of October. A week later, the WS Cox Plate Weight-For-Age-Championship attracts the best Australian horses to the Moonee Valley race course.

Concluding the Spring Carnival, there are two more races at Sandown at the end of November. 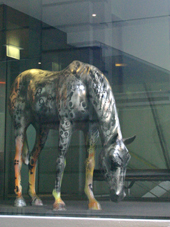 It starts with the Victorian Derby Day on Saturday.

The famous Cup Day follows on Tuesday, and on the Thursday after is the Crown Oaks day - the ladies day and race for the best of Australias three-year-old fillies.

The Carnival is concluded with the Emirates Stakes race the following Saturday.Here is a list of famous Cup winners.

Melbourne Hotels during the Cup

Melbourne attracts many interstate and overseas visitors during the Spring Racing season, and hotels get booked out and put on their best prices. Check here to book your best Melbourne Hotel deals and Melbourne Cup packages.

Return from The Cup to Melbourne Australia Home Page